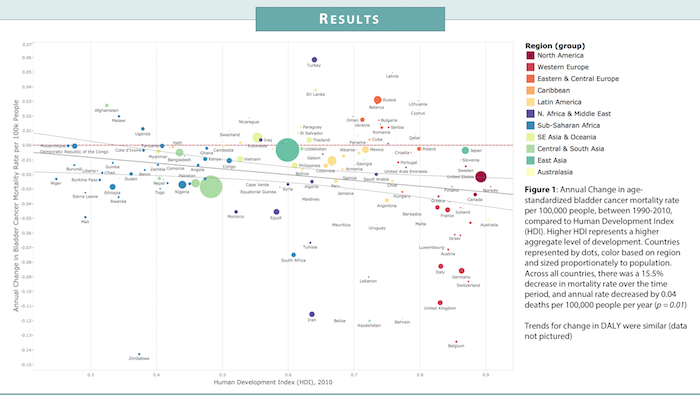 Featured Image provided by the UCSF Department of Urology.

Residents of Northern Illinois appear to be more susceptible to bladder cancer than other people in the nation, and researchers with the Illinois Cancer Council want to know why.

Katherine Mallin, an epidemiologist for the Illinois Cancer Council in Chicago, and researchers at the University of Illinois College of Medicine at Rockford are trying to discover which of those, if any, is responsible for the high than average rate of bladder cancer.

“We don’t want people to be alarmed and to think they have an epidemic of bladder cancer.” cautioned Mallin, principal investigator for the project. “It isn’t that much higher,” she said. “But just because it isn’t high doesn’t mean you don’t want to investigate. There are different patterns of data that are important to explore and times when additional studies should be done.”

According to the National Cancer Institute, the national incident rate in 1985 was 16.5 per 100,000 (28.5 in males and 7.8 in females.) A report compiled from data gathered between 1970 and 1979 showed only slight increases, Mallin said, and the occurrence of the disorder has dropped regionally since the 1950’s.

Joel Cowen, president of Human Services Consultants, a Rockford medical consulting firm, said he could see no cause for alrm concerning bladder cancer locally. “But it would be interesting to see if elements in the environment are contributing to the cause.”, he said. The study includes interviews with about 300 bladder cancer victims or their families. The major contributors to bladder cancer are believed to be smoking and exposure to compounds called aromatic amines, Mallin said.

“I don’t know that the water is involved.” Mallin said. “We’re looking at a lot of different factors. I don’t know what the risk factors are in Winnebago County; that’s why we’re doing the study.”

Bladder cancer is the fifth most common cancer in males and the tenth most common in females. It will cause an estimated 10,200 deaths in 1989, according to the National Cancer Institute. The study which begain in January, should be completed by the end of the summer, Mallin said. “We are nterviewing now and hope to finish interviews in July, then do an analysis.” said Mallin. “Basically, in general, we’re looking at risk factors.” According to Jim Walker of the Illinois Department of Public Health, 11 Winnebago County residents died from bladder cancer in 1987, while 466 deaths from the disease were recorded in Illinois that year.

According to the Illinois Department of Public Health website; from 1986-2014:

Cases of reported Bladder Cancer – National Cancer Institute (from the article); from 2010-2014:

That’s a total of 239 cases just in our immediate area between Winnebago and Jo Davies Counties in 4 years. Please note that the top 4 Counties are in the greater Chicagoland area. These counties have a much higher population than our area in the Rock River Valley. We have included all of the counties in Northern Illinois to show the comparison of cases per capita.